Admiral and Minister Pedro has made an amazing discovery during his excavations in Ladonia. He has found a cranium which, no doubt, belongs to the hitherto unknown Homo Cyklopicus.

The scientists are developing two theories. King Ladon can have been Cyklops. It is also possible that cyclops lived in Ladonia long before and that Ulysseus during his travels visited Ladonia. 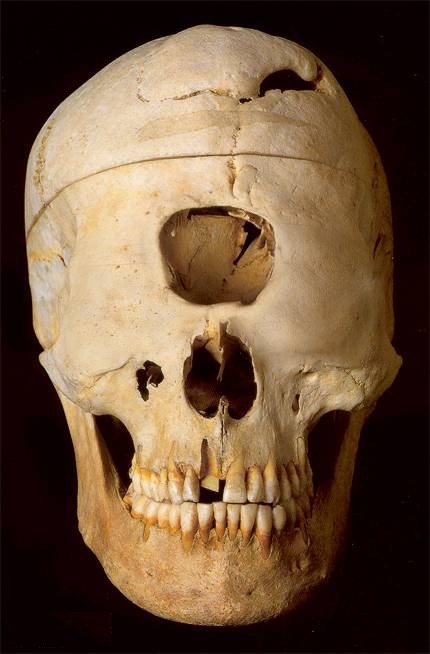 “Now there must be more than one King Ladon that we are referring to. As my department has well demonstrated, one King Ladon conquered Ladonia in 6th century A.D. However, there is another mythical King Ladon, whose actual existence could now have been revealed by these archaeological findings. According to Ladonian folk tales, King Ladon was a size of a highest mountain (in Ladonia, I suppose, and there must be some hyperbole included as there often are in folk tales) and could drink 15 barrels of green ale and eat two moose on one meal. Now this guy (and his companions) look like people who could have inspired people to tell stories like this. How did your team date these findings, dear Admiral?

“We are planing to use Radiocarbon Dating (Carbon 14 Dating).
Also we plan to compare with Isotopic tracer results from the
Radionuclides.
Then we plan to bombard with Ionizing radiation.
After that, Mass spectrometry for Radiometric dating, just in case,
for safety. Perhaps we will use a Calutron, not sure yet and Thermal
ionisation.

By comparing the results of each testing we might have an
approximation of the period when The Homo Erectus Ladonicus Gigantus
lived.

According to the team, they have been able to locate rests of the
stomac of one of the specimen (Three in total, one male and two
females apparently), and we will probaly be able to know more about
their diet.

The team is now looking for any tools that might be found on the
sites.

The longest jump ever made: Homo Ladonicus