The first biennale in the Moss biennale (Until October 15th)
The biennale within a biennale takes place on the 2 and 3 level of The Hedgehog (at Gallery F15).

This biennale examines one of the most used themes within the biennale culture, the question about identity. The curater has invited three artists, all of them working on examining their personal identity and its relationship to the society at a whole. The exhibition presents three angles, the national and cultural identity, the ethnical and the sub-cultural identity.

Conny Blom belongs to an ethnical minority in Scandinavia, the Swedish Laplanders. Bloms latest works often consists of different installation with carrots. In the beginning the carrots symbolised the food of the rabbit, Blom has the last years explored the cultural meaning of the rabbit. In Blom’s world the rabbit is a metaphor for uncontrolled spreading; a critique of the capitalist society and a support of shareware. But another more rarely interpretation is that the carrots could be seen as a longing for the reindeer, a longing for his lost cultural context belonging to a society of indigenous people.
The reindeer is a typical cultural symbol the Laplander; in the old days the welfare the Laplander society very much depended of the caretaking of their reindeers. One could say that he is putting out food in case of a lost reindeer would pass by. Blom doesn’t really know if carrots are the favourite food of the reindeers, but he has seen that the reindeers eats carrot at the “Skansen?”, a Swedish park and museum that collects old Swedish cultural symbols, tradition and culture. The sad thing is that almost the only contact Blom has with his ethnical background is through how it is presented within the Swedish culture, i.e. for centuries has denied the Laplanders the right of their own history and even language. It’s almost like that Blom doesn’t consider himself as a Laplander, feeling more like a Swede in general. 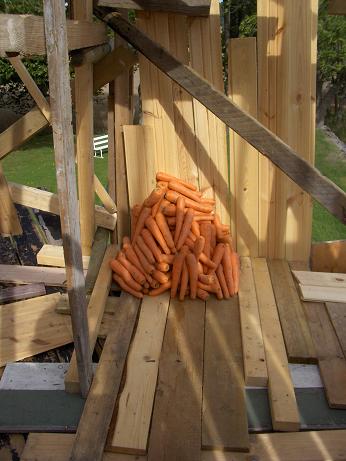 Klas Eriksson deals with sub-cultural identity. Ever since he was little, and regardless were he have lived, he has been a fan of the Swedish football team Djurgården. Eriksson has travelled with other fans to support their team around Sweden and abroad. The football fan culture has its own dress codes, language and values, a world, often condemned as violent, very far from the art world. Eriksson can?t explain his relationship to football and his love for his team. It’s no point to explain he says: “I can’t explain it myself?”
As a coincidence, a few days before the opening of this exhibition there was a riot in Sweden between Djurgården and Hammarby, both teams are from Stockholm. The match was stopped due to supporter violence and because supporters was throwing things into the arena. According to media, this was one of the worst incidents ever in Sweden in connection to a football match. Probably, both teams were punished for the incident. Eriksson was there, like he use to. He says that it was not his own team who started to misbehave, but it was “Bajens” (a nickname for Hammarby) fans that started the riot. 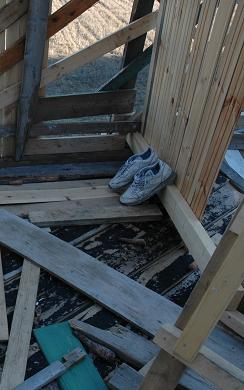 The last years, the artist Kristina Müntzing has questioning the idea of what is Swedish. In her installations Ny Svenskar (New Swedes) she explores possible identities by changing the head and the body between hundreds of dolls and toys. It’s easy to change and choose an identity today, but not to fulfil, develop or keep it. Often, the head and the body are not in coherence with each other. The head wants to belong to a certain identity (cultural, sub-cultural, ethnical, sexual etc) but the body (money, family, friends, education, the position in society etc) are often an obstacle to the person to be the one they wish for. The idea of Ny Svenskar was beginning then she was at a residency in Berlin.
Müntzing has German national roots, for many years this was something one did not talk about. It was almost a shame. In Sweden, Germany was a country used only for passing. Staying in Berlin, meant mixed feelings for her, being away, missing her husband and friends, and at the same time, realizing that she was not alone with these feelings in Berlin. A lot of people are also trying to make Berlin their new home, coming there for different reasons, and from different backgrounds. She also started to look different on Sweden, and question the idea of what is Swedish. In the end, she examined and overcome her mixed feeling towards her national German heritage, excepting it, realizing that ones identity is much more complex then just belonging to a specific national heritage.
In the presented work at the biennale, she has used common laundry bags, the one with a fake Scottish grid system. It was also in Berlin she started to use them, a common items at small stores in Kreuzberg (Berlin). It could be seen as an ironic art historical comment from the artist, but more important is that these kinds of laundry bags is a symbol of all the people travelling around Europe in search for a better life. You see them at bus- and railway stations, with all their belongings stuffed in these bags. 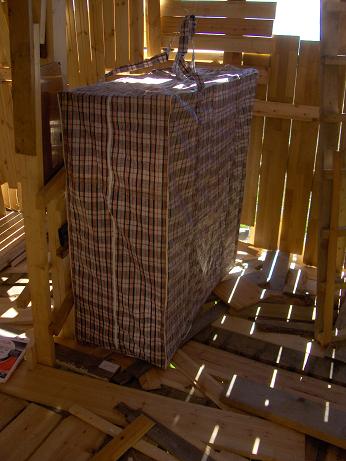 The Hedgehogger is the unofficial magazine of Moss Biennale.
Publishing Board: Martin Schibli and Lars Vilks