The State Secretary of Ladonia has had the honour of receiving a copy of Ladonian Magnitudes. Poems by the Canadian author Bryan Sentes. I have read it. At least once. It can be read many times as the poems are exploring the no man’s land between social reality and reality imagination. The author tells us a lot about food, in Germany and in Hungary, he pays frequent visits to the classical antiquity and even a trip to Magonia among the clouds. A rich collection in the tradition of T S Eliot and James Joyce.

Mr Sentes has also found that Ladon is the name not only of one river in Greek, but two, and that a commune in the Loiret also is named Ladon.

The Dragon Ladon in the garden of the Hesperides watching the golden apples (and actually pears) together with the Hesperides virgins, daughters of Atlas. This site should be found in Ladonia south of Arx. (Lord Leighton, 1892) 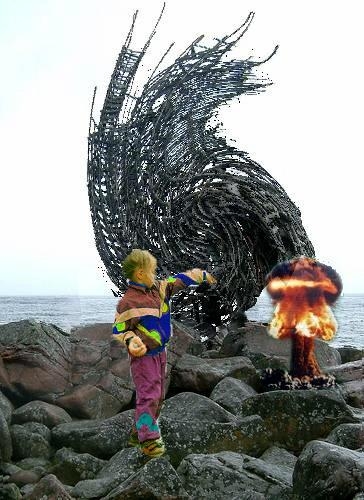 Ladonian Realpolitik: testing the bomb on a small scale explosion. So easy that even a child can do it.
(Photo: James Hartman)