A while ago we published James Hartman’s picture of the green kangaroo. The picture has been the inspiration of unknown poets – in the style of Samuel Beckett and James Joyce. 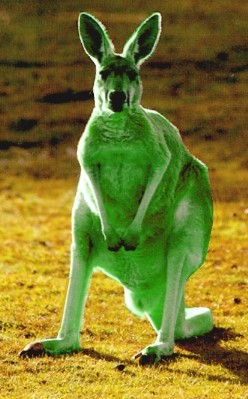 The source of inspiration

The Epic Poem of the Green Cangaroo

Sometimes I can see a few of them in my backyard. The green color intensifies in spring.
what IS a green kangaroo?
I SAW A GREEN KANGAROO HUMPING MY DOG. I SHOT IT IN THE HEAD.
I saw it frucking my dog!!!!!!!!!
f f f f f f to me and my family thats wat it did
He He He He He
these are pretty kool yeah
stop ripping off green kangaroos,
I belive in green kangaroos
see red ones boo moo
its a poofter, its a poofter fdgrdtygrty
fuck off , it humped my friend so I raped it
we make macs from its sperm
It raped my personal prostitute and myself. So I shot it and humped its dead body
I love plastic little boys. This kangaroo is an example of a little plastic boy. Yummy!!!
These people are awful. I think he nicked me wallet. He has music like abba and lyrics like Michael f***king Jackson. Punk as a bloody skunk.
I got screwed by a donkey.

A project about the war

Interview at the Radio Station