“Migration stays, but not immigration”, says head of MIBUL

The latest report from MIBUL, the Migration and Immigration Bureau of Ladonia, shows an encouraging increase in the immigration rate. Immigration increased last month by 600 per cent which, according to the Director General was an all time high. Although very positive figures, it creates lots of problems too. The Directorate has taken immediate actions by urging for more manpower resources and has already initiated the construction of a new office building. It is anticipated that this trend will be persistent and therfore will require a new complex surpassing in size the currently largest one, the parliament. The Bureau will also within short become the largest employer in the state of Ladonia.

Contrary to the booming immigration, migration has remained at a steady level for a long time. A recent survey shows that citizens leaving Ladonia are doing it for no obvious reason. There is also a tendency detected, that many people have doubts about their exodus decision, failing to properly explain their inducements (according to OFHS, Office for Homeland Security). These factors were recently dealt with by LOHO (the I Love My Homeland Committee), approaching people outside the border exit gate. Initially, the LOHO officers regrettably created some disturbance and commotion while tending to every person on the leave, but after the installation of a turnstile and the adoption of watch dogs were voted for in the parliament, the situation was contained in an orderly and civil manner. The tendency by some illoyals too, to try to surpass the exit lines by jumping the fence, has been elegantly solved by the new empowered barbwire crowned walls that so graciously frame our praised democracy, generally stated as probably the greatest one on earth, the head of MIBUL concludes.

In the true spirit of the decree from our beloved leader and father of all fathers, the State Secr.,saying that “no stone shall be left unturned in search and dealing with the roots of every problem, or even things apprehended as a problem”, the enforcements made by MIBUL in cooperation with OFHS stands out as extraordinary examples of successful authority execusion. 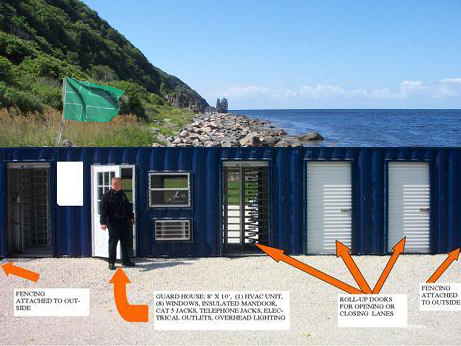 The Ladonia flag flying the Migration and Immigration Turnstile. Return gate is far left of warden.