Minister and president candidate Norbert Johnson has found a cheap and rather simple solution to the world energy problems. Just follow the instructions:

I have initiated the process of reversing the effects of global warming. I have taken off the doors to 6 stored refrigerators and freezers on my cabin property which is located on teh border of Michigan and Wisconsin. I hooked them up to a selfmade series of batteries connected to a power inverter. I am testing the local area to determine the fesiability of this project. So far it has a definite effect for two feet in front of each refrigerator, and up to three feet in front of the freezers. It is keeping the snow cooler especially if you face the back side in the direction of the sun allowing for the shadow to remain on the snow (this helps a lot). For this to be scientific, I set up three areas for the experiment. One area with refigerators with the doors removed and turned on, one with the doors removed and not plugged in, and one with one door on and the unit on and the other with the door off and the unit on. I set up a placebo effect to fool the snow by also setting up the doors to appear as refrigerators and freezers, placing a buzzing speaher in on to sound as if the refrigerator was still on. If this works, I think we can sell the Idea to the Whitehouse as a novel way to restore global temprature to its normal settings. Do you think that Ladonia will issue a patent for this discovery?

Construct of the batteries used:

1) locate aluminum beer cans on the side of the road. This is a natural byproduct found near taverns, bars and liquor stores as well as city parks after highschool students party.

Cut the top and bottom off. Then cut lengthwise and streighten out as a sheet.

2) remove copper pipes from your neighbors home (be sure you replace them with PVC pipes painted red so the neighbor wont know and his water service remains on.

Cut the pipe (preferably ones of one inch or better) into 5.5 inch sections. Then cut them lengthwise and hammer them into a sheet.

3) find a sufficient quantity of wool cloth (found on sleeping homeless in Washington DC, especially in the parks). Remove it carefully and replace with a space blanket so the homeless feller doesn’t realize the change of temprature.

Cut the wool cloth into sheets that can envelope the copper plate you made.

4) Fold the aluminum in half to a size sufficient to envelop the copper plate you made.

5) locate a small plastic cooler complete with lid (found at tailgate parties). You have to be athletic to retrieve them because the owner and his group usually will try and emulate football players and try to tackle you so they can win the game ball (in this case… the cooler), however, if you are fast enough, you reach the goal point first and WIN!!!. But remember to keep on running because for some reason they are bad sports and will continue even after you leave the park..

6) locate plastic milk jugs (usually found at a local store but sometimes there are milk delivery persons in the area and they can be found on unattended milk trucks). FInd a lot of kittens that look hungery and give them the milk. They will love you for this. Cut the plastic container into sheets that will separate the cooler into 4 chambers. then place them into the game cooler.

7) once you separate the game cooler into for chambers, place the plates of copper/wool/aluminum beer cans, into the winning game cooler in series of 16 plates each chamber (should create 4 sections in small cooler).

8) Hook up all copper plates to copper plates and aluminum to aluminum, with one wire extending for the copper and one for the aluminum so that it can be connected to by the power inverter.

9) Mix up a salt water solution of 15% salt 85% water. Be sure the salt is completely dissolved. Then pour the mix into each chamberto a point that almost covers the highest point of the bank of sheets, leaving the sodered wires above the water line.

You now have a 12 volt battery that can power an inverter. You must repeat this process for additional amperage necessary to power larger inverters. The benefit of this is that you are recycling the old refigerators, beer cans, neighbors pipes and empty plastic bottles. You are also providing food for furry critters, and aerobic exercise for yourself. It is a win win situation. xcept for the cooler game loosers who will actively persue you for the rest of your life… but that is covered in the aerobic exercise plan…and you didn’t have to pay for it! 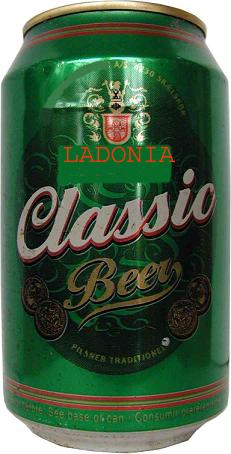 All you need is two beer cans

The Missile in position