It might be that Ladonia could make peace with Sweden. But it is not easy to handle the Swedish chauvinists. In some way or other they still believe that they are a superpower which they have been – 300 years ago. Anyway, today the Swedes are celebrating their National Day, a rather new idea. Whitsun was wiped out of the Swedish calendar and transferred to the National Day, a day that originally was a rather usual day called The Day of The Swedish Flag. The reason might be economic, it is cheaper with the National Day than Whitsun (that was always on a Monday).

But don’t forget to keep on fighting the Swedes. Today we celebrate in Ladonia but also in Sweden The Day of the Boiled Swedish Flag: 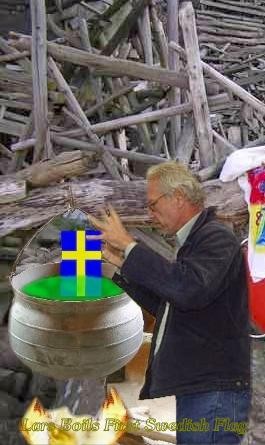