“Of course we use Ladonian calendar, the one that wise King Ladon once
established. This calendar works like this (quoting King Ladon
himself): ‘After every meal, have a rest until the candle has burned
out. Have a rest every night until the dawn. Land should be tilled
when it is not covered with snow, birds should be killed to be fried
when they fly by.’

Ladonian Academy of Science has scientifically measured that we are to
rest for 2000 ladoseconds after every meal. Note also how King Ladon
already has a modern sense of cyclical change between hours and
seasons (spring, winter, and autumn are all referred to). Academy
estimates that at the time of King Ladon a calendar year was most
probably more or less of the same length as ours, otherwise the
wintertime and times for bird migrations would not have kept up with
calendar.

Another research has been done by Minister and Prince James Hartman:

“In CLARIS ET LARIS, the sister of Laris and daugther of Henry, Emperor of Germany. Her first husband was King Ladon of Ladonia, a man of advancing years, after whose demise she was captured by Savari, King of Spain. Arthur rescued her and she married Laris’ companion, Claris. # 30 – 156” Source 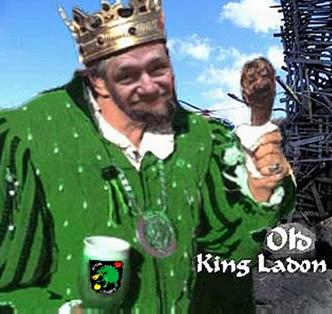 The longest jump ever made: Homo Ladonicus