Our resigning president Kicki von Hankell has done many things during her service as a leader of Ladonia. 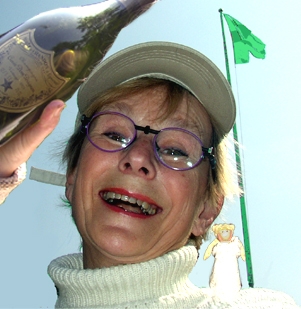 Here is some of the most important issues noted by the ex-president:

Head points from the presidential period

06 May 2004 Welcome to the new vice President Daniel Jiménez.

12 June 2004 Chernobyl discussion and the President´s opinion of the danger of the
nuclear power stations in the world and how radio cesium infected the
Nordic countries human life, animal life and everything that grows on the
ground from now on.

21 Aug 2004 Congratulations to the marriage of Minister of Art and Jump and his
beloved one.

04 Oct 2004 Introduction of the Ladonian Stone Circle in a parallel universe. This
heavenly construction consists of 9 stones, (360 degrees in a circle,
3+6+0=9, means the universal number) holding an, from above, eternal
memory of Ladonia.
Also showing how the Great Cheops pyramid in Egypt, the only
still existing ancient wonders of the world, thanks to work as
tourleader in Egypt and studies in Egyptology, has lead the President to
discover the ancient entrance to the pyramid, to the Grand Gallery and
the King’s Chamber.

05 Jan 2005 Regarding the terrible tsunami catastrophe in South East Asia Dec 26
2004 the President gave an advice that all must THINK compassion,
peace and understanding because our thoughts are real pure energy, and
have the possibility to change polarity in our world to a better one.
Perhaps we ourselves are guilty to the revolt of the planet against human
foolishness.

13 Dec 2005 The President signed the document of The Green Diplomatic
Immunity Act.

20 Jan 2006 Because of the espionaje de los Estados Unidos to our computers,
we need the opposite of Dante´s Inferno in Divina Comedia – light the
world and save our computers just by good thoughts, and do not play
war games.

23 Jan 2006 The President introduced the Navel of the world in the upper regions of
Ladonia, twelve meters above Håle Stenar, for the protection of the
country.
The base of the Guardian Angels.
Also a suggestion from the President: let the humorous power in an
ironical, satirical way win the war against the US.

25 Jan 2006 Declaration of the Guardian Angels statement: Fight with light and no
weapons.

04 Feb 2006 Regarding the Muhammed Drawings: the President think that the free
will, will expand in the Islamic world through access to internet, satellites
and cell phones etc.

9 Apr 2006 No to a proposed new constitution for Ladonia.

29 Jul 2006 Celebration of the 10 Year Anniversary of Ladonia at Nimis at
Kullaberg, Sweden. The President made a declaration of a sensational
discovery, she and her team of experts of excavations had done. Under
the library, which was burnt down during the bad fire in the icy winter
night February 1985 at Nimis, they found a very old original document of
unknown age. Through scientific research of the papyrus document and
its signs, they came to the conclusion that the document is a real
document of the earliest history of Ladonia, probably more than 6000
years old. A testimony from old ages and a reminder of the faith of what
will happen with the stonebook Arx. This book will once again, after eons
of time, rise to the ground and be found by nomads who once again will
build the new Ladonia. The President handed over the old document to
State Secretary Lars Vilks, to place it in the National Library of Ladonia.

21 Sept 2006 A new region for the President where invented by Adr. Pedro – Kikistan
with capital Kikibul.

26 Sept 2006 Day of Uriel, the Archangel, introduced by the President to the calendar
of Ladonia. Every year at noon the spirits will arouse around the world for
protection.

04 Oct 2006 Fossils of Homo Erectus Ladonicus Gigantus where found by Adr.
Pedro at Nimis and the President thought that it could be the remains of
the giant man King Ladon who has made a quantum leap into matter
and being saved as a fossil. The old papyrus document also state that
King Ladon and dinosaurs lived together in Ladonia.

18 Oct 2006 Regarding the discussion in the cabinet of Man and Dinosaurs living
together -the President showed pictures from a special research in Peru
of stone engravings with man and dinosaurs together.

19 Oct 2006 Introduced the theory that our world (planet) – if not flat but a sphere –
could have unbelievably many connections and tunnels (Navels) for
energy beams over and into the world like a pincushion.

00 Nov 2006 Lonely Planet published Guide to Home-Made Nations. Ladonia is one of
the micro nations with the President Kicki Hankell.

23 Nov 2006 Contact with and interviewed by the Norwegian journalist Henrik Pryser
Libell at a café in Malmoe. Writing about micro nations and meeting with
the President of Ladonia.

05 Mar 2007 Green Stone discussion in the cabinet The President preferred the green
Emerald as stone number one in Ladonia. Thought about Ladonia as a
Multi Stone Nation, or a Stony Nation.

13 Apr 2007 Concerning the strange mailing with the Pineland Republic: the
President made a declaration that: – I clearly state that I, the President of
Ladonia, have not had any “old bonds of comradeship” to any chief of
state or between any armies of Ladonia and the so called Pineland
Republic, and no connections in war affairs and no connections at all.

25 May 2007 Verdens minste land by Henrik Pryser Libell, was published in
Aftenposten in Norway and over internet.

Countess Kicki von Hankell
Ministress of the Dep. of The Guardian Angels etc.