Now the armed with new world experience of over a thousand years of exposure from Native American cultures to Settlers too Indiana from all over the planet, Norse Mystery Stone believes it is time to return as President of Ladonia to bring new world experience into Ladonian government for the good of both stone and mankind alike.

Back to the Ladonian homeland from where he was carried away over a thousand years ago on his Viking style adventure with real world experience from both sides now to share with us Ladonians.

So vote for Norse Mystery Stone as your natural choice for President of Ladonia!”

The connection with Ladonia has been noted by minister Taru:
“Norse Mystery Stone contains a pattern that originally comes from the sweater that King Ladon wore when he first declared Ladonia to be founded (when he was eating the lamb before the occasion, his wife was busy knitting a sweater made of its wool: thus the Department of History concludes that King Ladon’s legendary meal must have contained salted mutton instead of fried mutton). 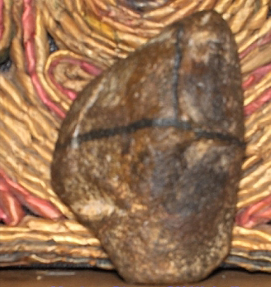