Candidate no 4 is Minister Daniel Kong. He presents himself and his program:

“I present you my candidacy for President of Ladonia,
I promise I’m gonna do absolutely nothing productive and If you vote me the first thing I’m gonna do is to create the official holiday “multiorgasmic week” for the enjoyment of all ladonian citizens.
It will be unlawful to not have at least one orgasm in the mentioned week.

If you give me your votes, I will declare an official day of “Do whatever you wanna do” some kind of antimartial law, all laws and obligations(but not your rights) would get suspended for an hour (researchers have demostrated that a longer period of time would be too much fun and we could never get back from the ecstatic plane).

And of course we will commemorate the “Pillow War”, only clean and new pillows will be accepted to this honourable commemoration day.

The economy of the new Ladonia would be based on Natural Economy (In tone with the color of the flag) the rebirth of the bartering system with the slight introduction of the random pricing, prices would be randomly selected after a series of Rock-Paper-Scissors games.
And as a definitive solution to poverty I already introduced to you the “Do whatever you wanna do” day, which includes the “steal as much as you can” minute, it would be an natural regulation of the economy by the active participation of the minority. As you can see it is a multifunctional day and useful day…

So, that’s is folks, vote me and I’ll give you heaven.
Daniel Pablo Kong
Minister of Unbearable and Subterfuges, Fraudulent Activities and Multiorgasmic Affairs.” 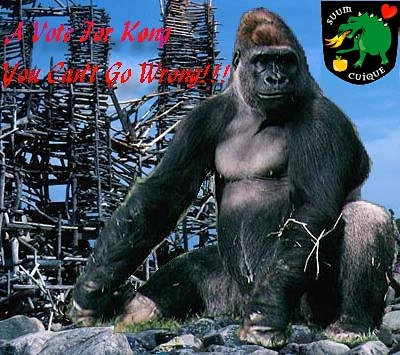 The Election: A word from the Interim President

Result of the Sweden election