NIMIS, Ladonia — Today was a great day in Ladonia History. Queen Carolyn I visited Ladonia and inspected the damage after the storm.

In a statement released to the Citizens of Ladonia Facebook Group immediately after touring the realm, the Queen said the following:

“I have seen the devastation in Ladonia. The storm sent the waves as high onto our shores as they have ever been, carrying Wotan’s Tower and throwing it against the rocks… smashing it to pieces. Wotan’s Tower is completely demolished.

“The Tower of the Winds is still roughly in one piece, but that piece is laying on its side. A new tower will be built on the now horizontal tower. The new, broader base will be more stable and able to withstand strong storms in a way the previous version could not.

“The new Throne, which was built after last winter’s storm knocked over the old Throne, is now also on it’s side as well and in many pieces. It will be rebuilt, but Wotan’s Tower (or whatever the name of the replacement tower will be) and the repairs and additions to the Tower of the Winds take highest priority.

“In good news, there is still much of Nimis standing. While the State Sec. and I were surveying the damage, there was a camera crew doing a photo shoot for a new brand of building materials. For some reason, the man in the photos is wearing a kilt… and it was a summery weight kilt at that. I’m pretty sure he was cold.

“I regret to say that I nearly died of a heartattack trying to climb back up the trail, out of Ladonia, because the trail is washed out, the rocks are slippery, and mostly because I am out of shape and unaccustomed to walking more than 500ft from my parking garage to my office.

“Rest assured, fellow Ladonians, there are still visitors to our shores (we met several… including a citizen), and the reconstruction plans are in place and shall commence when the weather is more accommodating.

While in Ladonia, the Queen and the State Secretary encountered a kilt wearing Scotsman wielding an axe. He was not dangerous, and he and his camera crew later left without incident. 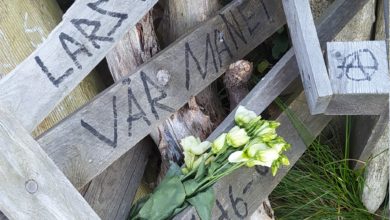